Cleveland has come a long way recently, please don’t screw it up if you visit.

I was all set to write a review of the new Ghostbusters movie (which I saw last night, and will still review), but there’s something a little more important weighing on my mind. Right now, Cleveland (my back yard) is hosting the Republican National Convention (RNC). Most of us locals are not exactly excited about this (no matter which side of the aisle we call home) because of all the tension.

The news media has been hyping up the possibility of violence for weeks with overblown, inflammatory rhetoric.  In other words, they’re creating fear because fear drives ratings.

There are rumors going around about the Black Panthers bringing guns to their protests, and the “Bikers for Trump” going on “patrol” as some sort of vigilante force. Rumors like these (especially the ones that are true) are adding fuel to the fire, and they’re not helping a damn thing. It should be noted that both of these groups are publicly promoting peaceful demonstrations. That being said if you’re saying things like, “we’ll only get physically involved in keeping the peace if the police ask us to,” it shows that what you’re really hoping for is a fight. That’s not the kind of statement you make if your plan is to help foster peaceful behavior.

And that’s part of the whole problem. Everyone seems to be expecting violence because we’ve been told to. That puts the whole city on edge, including the locals, the supporters, the protesters, and the police.

Instead of headlines like, “Cleveland braces for possibility of violence” or “Fears Of Violence At Cleveland Convention Stir Memories Of Chicago In 1968,” the mainstream media should be posting things like “‘Circle the City with Love’ brings thousands for peaceful event on eve of the RNC.” We need to focus on the fact that the vast majority of the people heading to Cleveland, whether it be for protest or support, are hoping to express their views peacefully. Yes, there is passion, and yes, every voice wants to be heard, but peace is something people from all sides ultimately want.

Sure, there are some asshats that actually thirst for the violence that the media not-so-subtly implies is immanent, but by focusing on those few, we’re encouraging fear. We’re helping to construct a scenario in which violence seems to be more acceptable due to inevitability. As it unfolds, those involved might think to themselves, “Oh, it was going to happen anyway.” It takes away some of the accountability, and makes it easier for bad things to happen. 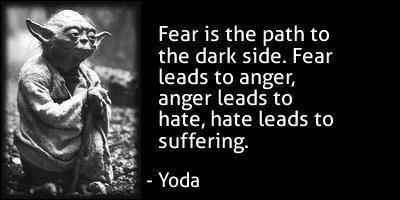 Yoda knows what he’s talking about.

On top of all that, those that wouldn’t normally engage in violence are on edge because the possibility of violence has been thrown in their faces for months. That makes people jumpy, and it takes far less provocation to make a jumpy person act rashly.

In short, yes, Cleveland is a bit of a powder-keg right now, but I would argue that it’s not because people are inherently violent, but rather, because we’ve built an environment that encourages violent reactions.

I’m sick of fear mongering, and I refuse to let talking heads on ratings-obsessed news networks tell me how I should feel. There’s no reason why we can’t have peaceful demonstrations at the RNC because most people want to avoid violence. I’m thoroughly disgusted with the news media and our politicians for allowing the hype to build the way it has.

So this post is really a call to action. Let’s prove that humanity is better than how it’s portrayed on television. Let’s show the world that people holding wildly different ideological and political views can come together, in one city, and have an adult conversation about our future. Let’s hurt the news ratings by avoiding the easy violence that they expect, and deflate some political egos along the way. Let’s fight the insanity by not fighting.

We’re better than this, people. Let’s start acting like it. Remember, we’re all human beings, whether we ride motorcycles, wear a badge, or just plain like to hug people. Don’t answer violence and hate with more violence and hate because that doesn’t work. Read a history book (or watch Game of Thrones), and you’ll see what I mean.

Andy Weir got it right in The Martian:
[su_quote cite=”Andy Weir”]“If a hiker gets lost in the mountains, people will coordinate a search. If a train crashes, people will line up to give blood. If an earthquake levels a city, people all over the world will send emergency supplies. This is so fundamentally human that it’s found in every culture without exception. Yes, there are assholes who just don’t care, but they’re massively outnumbered by the people who do.”[/su_quote]

People generally want to help the people around them. We’ve evolved that way because it was necessary for our survival as a species in a world full of dangerous things. Let’s not devolve into fear-driven sheep. We’ve developed tools so that we can defend ourselves from dangerous things, and the sharpest of these are our brains. Use yours.