I’m a writer.  I studied it for four years to get my BA in English, then I studied it for two more to get my MFA in Writing.  I’m telling you that up front to properly set your expectations.  I’m somewhat picky, and it can be somewhat obnoxious.  You’ve been warned.

I’m especially picky when it comes to telling a story.  There’s a part of my brain that I can’t shut off which constantly analyzes and critiques every movie, book, short story, and news article that I am exposed to.  Yes, I’m aware that this is quite the annoying habit, and I’m sorry in advance.  It kind of drives my wife crazy.

Now, onto the subject at hand.  If you’re anywhere near as analytical as I am with story-telling, you’ll probably have noticed that Hollywood is incapable (for the most part) of making truly good movies.  It bugs the hell out of me.

First, Hollywood budgets for most of the terrible movies coming out are MASSIVE.  That means that they can hire whoever they want as a resource (actual experts in any of the subject matter covered in the movie).

If you’ve got a cop in your movie, and your movie is set in downtown Baltimore, you better damn well hire a few Baltimore police officers to make sure you’re getting the character and procedures right.  Why?  Because if you have police, or family members of police officers in your audience, and you get it wrong, you’ve automatically alienated them.

Gravity is a perfect example of this.  I haven’t seen it yet, but there are several things wrong with the preview alone.  It might tell a compelling story, but why not do so with a realistic backdrop?  Neil DeGrasse Tyson would have likely jumped at the chance to consult on the movie–instead, he had to wait to critique it after it released.  Gravity isn’t even a major offender compared to a lot of films now-a-days.  I’m not saying it’s a bad movie either, just that it probably could have been a little better.

It bugs the crap out of me that hundreds of millions of dollars are spent on these films and they get stupid little things wrong.

Here’s my theory as to why this happens:

For some reason, those are the only factors in the equation for today’s movie makers, which is stupid.  Why can’t they understand that simply blowing more things up, or killing off more characters, or making love triangles even more convoluted than they were the first time doesn’t actually make movies better?

You get the idea.  No one stops to think things like, “Harrier jets wouldn’t possibly survive 1000 years in storage, and even if they did, you couldn’t learn to fly one in two weeks.” (Battlefield Earth)  Or, “Hey, Tony Stark could totally call on his army of Ironman suits to defend his home rather than getting blown up.” (Ironman 3)

Hell, this idiotic idea of one-upmanship is now causing significant plot holes in movies (like the examples listed above).  Is it a plot hole that Tony Stark lets his home blow up, endangering himself and Penny, when he has an army of Suits in his basement?  You bet your ass!  Why would he ever let that happen?  In fact, why the hell would he give out his address on national TV and then NOT prepare for a fight?  It makes zero sense.

And in Battlefield Earth (a horrible movie), there is SO much wrong.  Harriers are one of the hardest jets to fly ever built (based on what I’ve read).  Jet fuel breaks down over time.  A lot of the materials jets are made from decompose over time (like rubber), and they were sitting in a nice, air-filled hanger for 1000 years.  Even IF the jets survived, and IF the rag-tag nomad survivors of Earth could have figured out how to pilot them, why would they be more successful than the original fighter pilots of Earth–the ones with years of actual combat experience?

Those Harriers were in that movie for two reasons.  One, they are recognizable, human weapons of war.  Two, it made for a cool looking fight scene in which the audience could easily tell which side was which.  It didn’t matter that there’s no way in hell that battle would have worked out in the Earthlings’ favor.  It was simply eye candy.  Stupid.

That’s just one of the MANY major problems with Battlefield Earth (the movie).  In fact, the screen-writer won an award for the worst written movie of all time not too long ago (even though he didn’t really have much to do with all the badness). 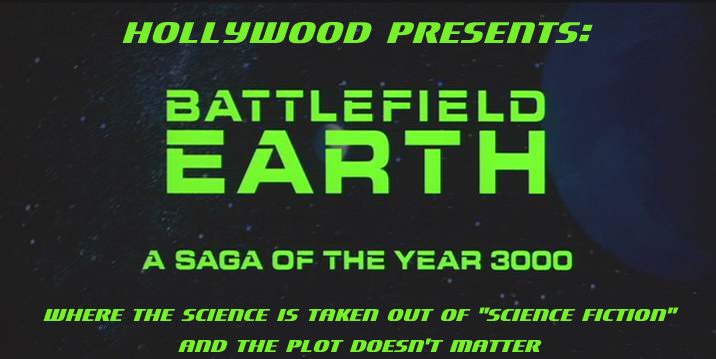 I’m still mad about this movie

What am I asking for?

It’s real simple.  I firmly believe that you can make a truly good movie whilst still maintaining suspension of disbelief.  Make it realistic, PLEASE.  You’ve got mountains of money–hire experts, do some research, and for the love of all things holy, quit thinking that the key to making a sequel is as simple as making everything bigger than it was in the previous movie.

I don’t think that’s too much to ask.

And, I beg you, don’t ruin Ender’s Game!