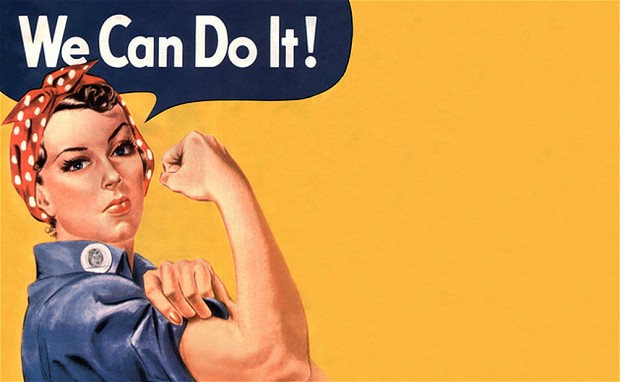 I’m going to attempt to write this blog post without sounding like a misogynistic pig, so please attempt to keep an open mind.  To that end, I’ll start off by saying that I’m a firm believer in gender equality.

Men and women should have equal rights, and I have never understood how there has ever been debate on this issue.  It should just happen, because it’s freaking common sense.

The pay inequality between men and women, for example, is criminal.  Women should be earning equal pay for equal work. 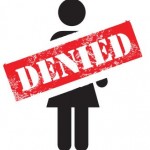 Now, I know what you’re thinking: obviously I’m a proponent of women’s rights, so why am I worried that some might see this post as a sexist rant?

It’s true that I’m a strong advocate for women’s rights (and my wife will attest to that, as will my friends–both male and female).  However, I came across an article yesterday that got me thinking.

Here’s it is.  It’s a piece by Alex Brown over on the Tor blog about how women are sexually objectified through Gamora’s character in Guardian’s of the Galaxy.

I take issue with some of the statements in this article (not all).  If you wanna know why, keep on reading.

First, the points I agree with

Gamora’s outfit was definitely designed to be on the sexy end of the spectrum.  Here, see for yourself: 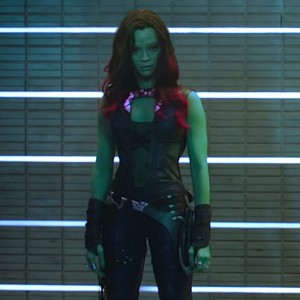 But it could’ve been a whole lot worse. Here are some of her outfits from the comics (see the first post). Almost all of them are quite a bit more revealing and sexualized than her gear in the movie.

Oh, and I’m just as pissed off as Alex Brown about the lack of Gamora merchandise available.  Disney should be ashamed!  While we’re at it, where is our Leia stuff!?  She’s a personal hero of mine in the land of fiction, and we shouldn’t have had to fight to get her some recognition.

I think James Gunn is being a complete jerk about the script too, but like Slate magazine, I choose to look at the situation as optimistically as possible.  I agree that Nicole Perlman’s work was critical to the script, and that she deserves the attention and acclaim that she’s getting (and should probably have more of it).  James Gunn should just shut up about it, and enjoy the film’s success.  I mean, I’m sure he was instrumental in writing the script, but he doesn’t have to belittle Perlman to get credit of his own.

I agree with the whole “whore” joke thing being way off-base, but I disagree with Brown’s assessment of the intent behind it. Yes, it’s wrong to derisively call a woman a whore for any reason, and I’m in no way trying to excuse that. I’ll explain more in a bit.

I’ve never looked at the word “bitch” the way Brown has either.  She postulates that it’s a term that represents a “headstrong, independent woman who doesn’t take shit from anyone.”  The word has just never meant that to me, and maybe that’s my own naiveté. Seen through Brown’s eyes, I can definitely understand why she would take offense at one man calling another man “bitch.” More on that below . . .

Now I’ve got a bone or two to pick

The inspiration behind my post today came from my wife really liking the idea and this quote:

That’s bullshit. If we want true gender equality, we have to be honest with one another.  How the hell is this not male sexual objectification:

This bit from the scene was nothing more than a blatant excuse to show off Star Lord’s sexy pectorals. It wasn’t crucial to the plot that he be shirtless, the Gatorade sweat didn’t reveal a critical character flaw, and his angry come-hither stare was for who, exactly?

Yes, Gamora spent most of the movie in her outfit, and we only got a short scene with Pratt’s glorious abs, but they’re still in there, and to dismiss the shirtless wonder for no other reason than Gamora also wore wedge heels is ridiculous. 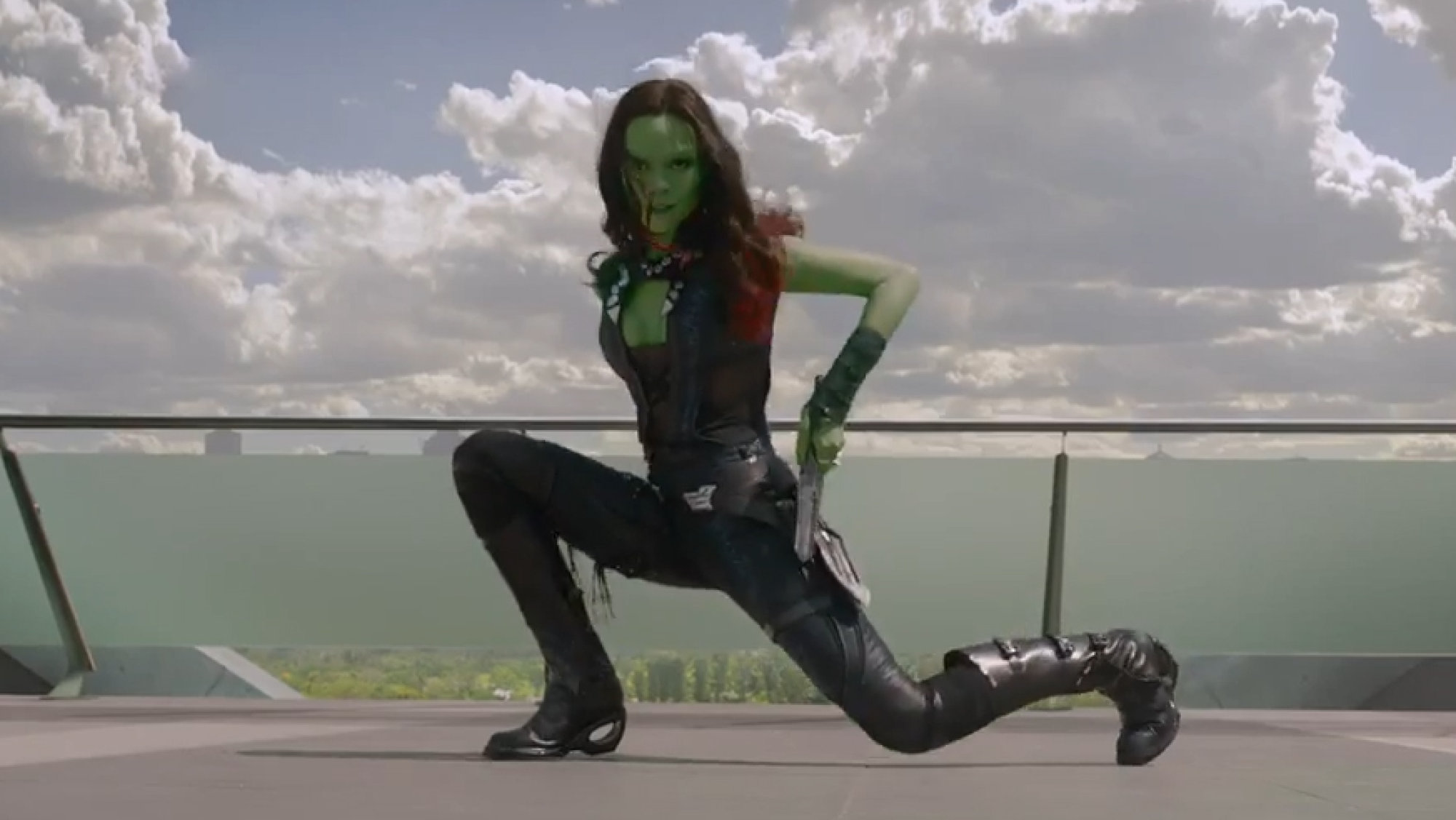 Seriously, I think she just looks ready to kick ass.

Why does this bother me so much?  Simple.  We can’t have gender equality if we continue with these double-standards.  The street goes both ways.  Men are held up to impossible standards of beauty just like women are.  Look at male characters in the movies, video games, and comic books if you want some examples.

It affects us too–even if men aren’t as vocal about it. Go to a middle school, and see which boys are ostracized and ignored, and you’ll see what I mean.  The weird boy that sits and reads all day and doesn’t look like a mini football player (that was me) has trouble fitting in just like the slightly overweight girl sporting braces before any of her friends.

If we want equality, we have to admit that problems exist on both sides. We can’t stop the sexual objectification of women by arguing that men don’t have to deal with it too. The goal for society should be to promote healthy self-image for BOTH sexes–to show that it’s who we are that matters.  We’re people, dammit, not playthings. We shouldn’t allow ANYONE to be treated like a piece of meat, no matter what anatomy decides to show up at birth.

On to the word “bitch.”  See, when I hear that word, I think of a generally undesirable person (male or female); someone who complains, or is difficult to get along with.  So, I didn’t immediately take offense when I heard it in the movie.

I’m not saying that Brown’s perception of the word is wrong at all.  I’m just saying that not all people may realize where she’s coming from.  That doesn’t make it OK to use, but it does highlight the importance of educating people.

I’ve never been a big fan of using the word, and because of Brown’s perception, I’ll be even more careful about keeping it out of my lexicon than I was before.

As far as the “whore” joke goes, I think that stems from character development rather than misogyny on the part of the filmmakers. Bear with me for a sec while I explain. 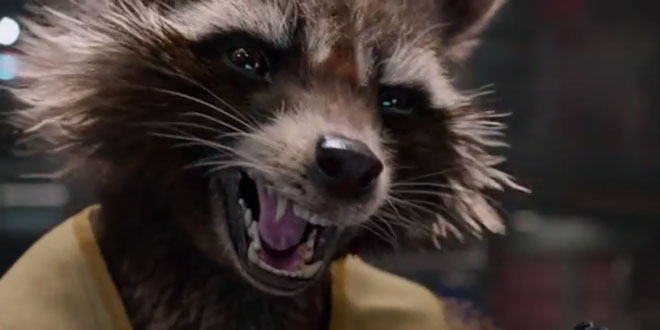 When the Guardians of the Galaxy first meet, they don’t like each other.  This is true in the movie, and in the comics. Gamora is a strong, independent woman who has been oppressed for who knows how long. She’s trying to escape and takes her freedom very seriously.

When she’s called a “whore” in the movie, what better way is there for her to build up some initial hate for her undesirable companions?  There’s a reason this dialogue happens relatively early on in the movie, when everyone is already pretty pissed off.  It shows that Racoon and Drax are, at least initially, kind of insensitive (at best) or sexist (at worst) assholes.

In other words, I think the fiercely independent Gamora was called a “whore” precisely because the word is so offensive. I also think it highlights the growth of Racoon and Drax as characters by the end of the movie (because they look at her as a team-member and friend rather than a sexual object). I mean, they defeat Ronan the Accuser with freaking friendship, and it’s demonstrated that each member of the team is important and stronger together than they are apart.

To close, here’s a video that’s both fun and highlights some of what I’m talking about:

Here’s another one (which focuses on some of the trouble girls have growing up):

Let’s fix this on both ends of the spectrum, ladies and gentlemen. Let’s quit being assholes to one another. Let’s accept people for who they really are. Let’s stop trying to live up to photoshop and digital muscles. Let’s be us. I’m OK with that, and you should be to.