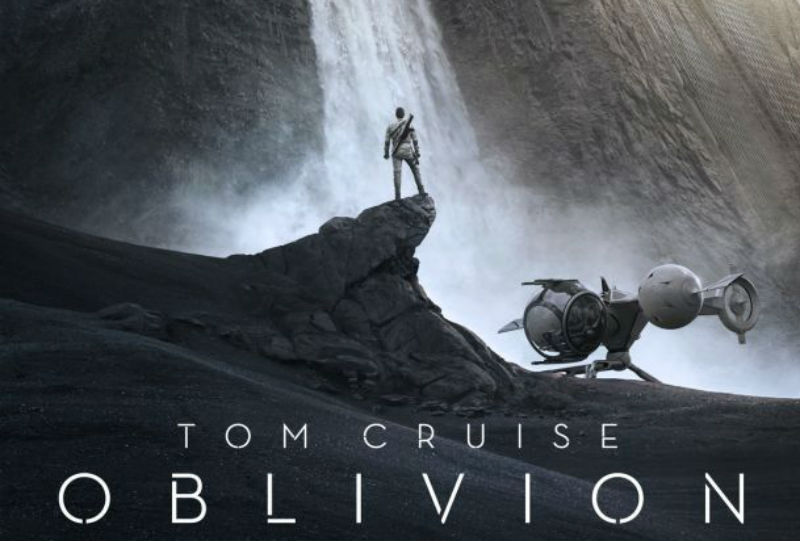 I saw “Oblivion” this weekend, and I’m going to review it here.  I’ll tell you up front that I really enjoyed it, and am seriously considering going to see it again.

Yes, it had a few problems, but overall, it was a pretty damn good flick.  I’ll explain more after the break.

I’m a big fan of “hard” Sci-Fi.  That means, essentially, Sci-Fi that sticks very closely to actual science.  Typically, in hard Sci-Fi, you see technology that is an evolutionary result of the science we know and love today.  It’s cool, because we get to see where today’s tech might take us, and it adds a layer of believably to a story.

I explain because “Oblivion” almost hard Sci-Fi.  Oh, sure, there’s some real science in there, but there’s a lot of stuff that just can’t happen.

Some of the big concepts, like using salt water for fusion (and one other one I won’t tell you about because it’s a spoiler), are based on stuff we know today, which is very cool.  It’s in the details where “Oblivion” stumbles a bit.

For instance, Tom Cruise can’t dodge lightning, nor can he reverse direction or stop in mid air whilst flying at a decent clip–not without an aneurysm or passing out, anyway.

Why do some people explode when shot, and others don’t?

How can a scan be complete enough to get blood pressure, heart rate, and body temp, but not be complete enough to see whether or not someone has a penis?  Or, hell, why can’t that scan spot a giant power-source on board?  (I’ve found out a way to explain this one that involves shielding, but come on, they could’ve said something about it so I wouldn’t have to doubt.)

Why do bad guys always give the good guys enough time to spout a triumphant, in your face, speech (even if it’s a good one)?

How long does it take someone to bleed out if shot in the stomach?

Anyway, you get the idea.  It seems Hollywood wanted to ramp up the drama and action a bit to make things more exciting, but I honestly feel it was unnecessary.

The story was pretty okay.  The characters were actually really good.  My friend Dan came out of the theater saying he’d watch it again right then.  We talked about it all the way home, questioning things, explaining things, and extrapolating the history that came before the movie.  That’s what counts.

If you spend a good chunk of time after a movie saying anything other than, “Damn that sucked” or “I wish I didn’t pay for that,” then chances are, the movie did something right.  “Oblivion” does a lot of things right, and only a few things wrong–that’s a win in my book.

If you asked me to go see it tonight, I’d say yes (though I saw it yesterday).  The local paper gave it a “D,” but I’m beginning to think that the person that reviewed it just didn’t understand the movie.  🙂

UPDATE: I’ve seen some reviews (like this one on io9) that talk about the characters being flat.  I admit, they’ve got a point, but that’s part of why I liked Tom Cruise’s character.  He absolutely is a “paint-by-numbers” hero, but I like that they took that template and crammed another layer into it in the form of story-driven development.

What do I mean?  I mean his curiosity  thirst for exploration, and the inexplicable memories of a planet he wasn’t old enough to have experienced.  How he deals with all that adds a layer of depth that saved him as a character for me.  Where I’d have liked a little more depth is with his wife.