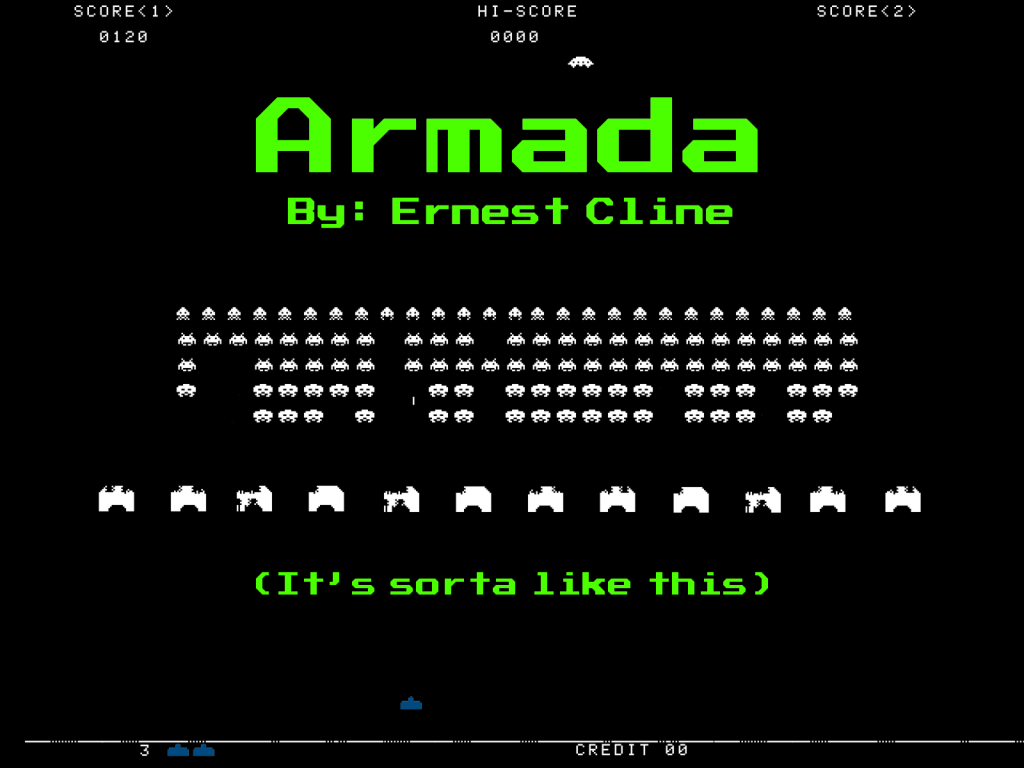 Well, I finally got around to reading Armada by Ernest Cline. Overall, it was pretty good; a fun read that told a story that I, as a gaming nerd, found extremely compelling. If you were a fan of Ready Player One (RP1), you’ll probably like Armada. All that being said, I don’t think Armada is quite as good. The story feels rushed in several places, and I didn’t feel myself rooting for the protagonists like I did in RP1. It was good, it just needed a little more polish, I think.

And here’s the audiobook sample, because I can put these in now, and that’s awesome:

Be warned, from here on out, there be spoilers. I’ll hide the major ones in spoiler boxes, so you should be safe-ish, but if you want to be totally in the dark about the book, go read it first, then come back to discuss whether or not you agree with my review (I love me some book discussions).

If I’m right about the deepest level of the conspiracy, in fact, I actually think the story is a lot more clever than it seems on the surface (which wouldn’t surprise me after reading RP1). Me being right about that main conspiracy would also mean that the story holds together a lot better than it might appear. For those reasons, I’m putting this in the win column–the story is good (if I’m right), and I enjoyed contemplating the ramifications of the deep conspiracy that I think is there.

[su_spoiler title=”A bit about Armada the game” style=”fancy” icon=”chevron-circle” anchor=”ArmadaGame”]Here’s another conspiracy! On the surface, Armada is a fairly traditional space sim MMO about aliens invading earth. In it, you’re a aerospace fighter pilot trying to stop the evil invaders from claiming Earth for it’s delicious resources.

Fairly typical, but that’s just the shiny veneer. In reality, the game is a training sim, and the alien fighters in it are real analogs to actual alien invaders poised to attack Earth. It was constructed with the help of the EDA (Earth Defense Alliance) and top game designers to be as realistic as possible so that Earth could build a massive army of ace fighter-drone pilots in secret without panicking the populous.

Kind of a cool idea, actually.[/su_spoiler]

Moving on to the main character, Zack Lightman (which is an awesome name, by the way) . . . He wasn’t perfect, and that’s a good thing–we got to see a fairly unique protagonist built on top of some fairly cliche stereotypes, which is a neat trick. He’s mostly based on the typical gamer archetype. Here we have a geeky (an obvious outsider) kid with a few close friends who finds his escape in the form of video games (particularly one called Armada). Typical right?

But that’s just Zack’s base layer. He has a somewhat unique backstory as his father was killed in a sewage plant explosion while Zack was just an infant. Not only did his father go in a humiliatingly rare way, but it leaves Zack fatherless for, essentially, his whole life.

[su_spoiler title=”Zack’s father” style=”fancy” icon=”chevron-circle” anchor=”ZackFather”]Yeah, I know, Zack’s father didn’t really die, which further messes with Zack’s somewhat fragile emotional state when he finds out, adding a lot to his character development. It also exposes two layers worth of conspiracy or so.[/su_spoiler]

On top of that, Zack’s father was only 19 at the time. So, you’ve got a young, single mother raising a kid that just happens to look like a clone of her lost love. It makes for an interesting, and somewhat unique backstory–not because of the tragic death of a parent, but because of how that death occurred. It’s something the whole town knows about, and you can just imagine how uncaring bullies would’ve treated Zack as he made his way through school. It affects every aspect of his life: his relationship with his mother, his friends, his school life, his social life, his hobbies, and really just all of it.

What I’m getting at is that there is a solid amount of character development centered around Zack, and, for the most part, it’s fairly well done.

I also found the intro to Armada to be particularly brilliant because it played directly into the character development of Zack while simultaneously hooking my curiosity and moving the story forward. Read the sample up there, and I think you’ll see what I mean. The whole, “is the spaceship real” thing works very, very well.

The not so good

On the subject of character development . . .
I know that I just said that Cline did a good job with character development for Zack, and I think he did. Zack felt pretty real, wasn’t totally likable at first (to me, at least), and had believable problems and weaknesses. I mean, I think some things could have been done better (a little bit more development surrounding his two best friends, for example), but it was pretty solid. I particularly liked the relationship he has with his mother. He also grew, and became much more likable by the end of the book.

The problem lies in the fact that every other character in the book, with the possible exception of Zack’s father, is just background noise. I never really got to know the other people in Zack’s life. They were just there as supporting cast for Zack, and they all seemed fairly similar. He had a gamer mother who played games with him. He had a gamer pair of best friends that played games with him, he had a boss that ran a game store and played games with him. You get the idea. It’s not that these relationships aren’t believable–they are. I mean, I grew up gaming with my two best friends too, but they were real people. The characters in Armada that aren’t Zack Lightman feel more like cardboard cutouts. It makes the story less powerful, and it makes Zack less real. I think this is the main reason I wasn’t pulling for him like I should have been. I mean, I was rooting for the guy, I just had less of an emotional attachment than I should have had.

And about the pacing . . .
This book moves very, very linearly. The climax almost didn’t feel like a climax because it was just one more event in a series of surreal, major events. A lot of the book felt rushed, and Cline just didn’t take the time to build suspense like he should have. The example is in the spoiler box below.

[su_spoiler title=”Xavier does his thing” style=”fancy” icon=”chevron-circle” anchor=”XavierSacrifice”]A great example of what I mean: Zack’s father, Xavier Lightman, sacrifices himself for the good of the world. He does it to delay the misguided Admiral Vance in his attempt to commit xenocide, which buys time for Zack to take out Earth’s doomsday weapon before they can deploy it against the “alien menace.” The hope is that, by showing that humanity is capable of stopping short of committing such an atrocity, it will stop the interstellar war that humanity couldn’t have won anyway.

This should’ve been momentous–a massive, and emotional thing. But it was over so fast that I didn’t have time to cheer, or to get upset. There was no build-up, no suspense, other than the fact the Earth hangs in the balance. But we’ve known that for the whole book. We need prods to keep that suspense going. Heck, the act itself seemed to be only marginally helpful, at best. Vance was back in the fight in moments.[/su_spoiler]

What I really wanted out of this book was another 20 pages or so–maybe more. I wanted time for the suspense to build, and I wanted time to process the events as they happen. I think that pacing is the main reason that this book isn’t getting rated as highly as RP1.

Overall, I liked Armada. I enjoyed reading it, and I’m genuinely curious about the sequel (Ernie, you better be writing me a sequel so I can find out whether or not I’m right about my conspiracy theory). But, the book has some problems (the pacing and non-Zack character development mentioned above).

Armada not as good as RP1, but it isn’t garbage either. If I had to rate it, I’d probably give it a solid 3.5, which isn’t bad if you consider 2.5 is average, and 5 is one of the greatest books ever.