So, I got a smart watch a few weeks ago after much debate with myself over what to buy, and whether or not I actually needed the thing to be “smart.”  I ended up with a Pebble, and so far, it’s pretty freaking awesome.  If you’re looking for a bulleted summary of this review (and don’t feel like reading about how I decided to get one), you can skip right to the bottom to see pros and cons.

Before I continue, I should give you a little bit of backstory–how I arrived at my Pebble destination, if you will. A while back, I had a FitBit Force, which was discontinued because a small number of FitBit users were getting a rash from the metal on the back. I, unfortunately, was in that small group of people, and was soon sporting a nifty new rash. That made me sad, because I really liked my FitBit.

I replaced my FitBit with an LG Lifeband Touch (which you should stay the hell away from). I bought it because it had a display, and even had some “smart” features (like caller ID, and the ability to control my music) via a tiny touchscreen. I also thought it looked kinda cool.

However, that piece of crap started fitting more and more loosely until, finally, it broke (where the band meets the tracker). This happened only after 4 or 5 months, and I’m still pissed off about it. It took LG over a month to write me back after I emailed them to complain, too. They have offered to replace it with a new one, which I do not want because, why would you want to replace a peice of junk with another peice of junk? Way to go LG.

Anyway, that leads me to today. I was thinking about buying a FitBit Charge or Charge HR. I really like having a fitness tracker because it pairs nicely with my competitive nature. Being able to set step goals, for example, is awesome for someone. If I see that I’m not going to hit my goal, my desire to win kicks in, and I start moving around until I hit my target. This helps me keep in better shape, and that’s all to the good.

I also like a fitness tracker with a display. I don’t want to have to constantly pull my phone out to see how I’m doing. That means no UP24 or FitBit Flex for me.  I also found that, while it worked, I used my Lifeband Touch constantly to control my music or audiobooks (especially while at work or walking the dog).

To get those extra features, I’d need to go clear up to something like a FitBit Surge, which runs a cool $250. Ouch.

That price point got me to start thinking about smart watches. Why would I spend $250 on a fitness tracker, when I can spend $200 on a pretty good smartwatch? After all, said smartwatch could count my steps and run fitness apps, and it could also integrate more deeply with my phone (think notifications) while supporting a plethora of other apps.

Here is my problem with smartwatches though: I don’t want to put something on my wrist that costs a whole lot of money that will be outdated in 7 months to a year. Smart watches of the Android Wear variety (which is the most full featured option at the moment) are in their early stages right now, and the tech needs a bit of time to mature anyway.

So, I thought some more, and that’s when I realized that the answer is easy: Pebble. The Pebble watch is pretty simple–it has an e-paper display (which uses very little energy, kind of like the E Ink technology in a Kindle Paperwhite) that essentially mirrors and accompanies features from your smartphone. It acts more like a second display and remote control accessory than a stand-alone device. It also has a built-in accelerometer to get step and motion data (like a fitness tracker).

Update: I tweaked the paragraph above after it was rightly pointed out to me that the Pebble doesn’t use E Ink, but rather an LCD-based technology they market as “e-paper.”  Both are low energy, so I left the comparisson in, but it is different tech. My apologies for innacuracy!

My Pebble running the Misfit app

That means that it has the hardware to track the same stuff as a FitBit Flex of Charge, but you can get one for $100 (I got mine for $90). The Flex is $100, and the Charge is $130. So, for $10 less, I got fitness and sleep tracking (like I would with the Charge/Flex), and I get notifications, music controls, navigation, and a whole lot more. Oh, and it’s water resistent, unlike the Flex and Charge.

Since the Pebble is so simple (and so comparitively inexpensive), I’m not nearly as worried about it getting outdated (which is still what’s holding me back from Android wear or the upcoming Apple watch). Pebble has a great developer community (which means it has the support it needs to thrive). Even the battery life is fantastic (thanks to that low-energy E Ink display). 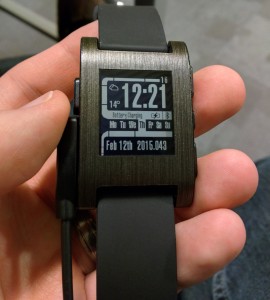 Actually using the Pebble is pretty straightforward and painless. It’s been extremely steady and reliable (virtually zero crashes), and does exactly what I want it to do. In short, I really love this thing. If you’re in the market for a fitness tracker, or if you’re curious about smartwatches, I highly recommend the Pebble!

The not so good stuff: