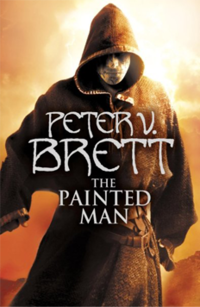 I recently listened to this book because it was one of the top rated fantasy titles on Audible. So, I figured it was worth checking out, and it was (you can read the eBook for free from your library).

That being said, Peter V. Brett (the author) claims that this is book the first in a five book series.  I’m telling you this up front because you really should know that going in.

The setup takes somewhere around the first 3/4 of the book, and it feels slow.  That’s not to say it’s badly written (it’s actually pretty solid), but it’s definitely not fast paced.  This is a throw back to classic “epic” fantasy, and the scope is massive.  Brett wants you to understand the details behind his characters and the setting before he really dives into the meat of the story.

I wasn’t prepared for that, so it threw me off a little, but hey, it wasn’t bad.  I’ll have more details after the break, but be warned, there be spoilers ahead.

I’ll start off my review with some background, then some of the things that bother me about the book.  From there, I’ll move onto the things it did well.

The setting is somewhere between dark and epic fantasy.  Every night demons (called corelings) rise from the ground when the sun goes down, shrouded in mist, to kill and eat anyone unlucky enough to be caught.  Offensive wards (magical symbols that have the power to affect demons) have been lost, so people huddle behind defensive wards every night so the demons can’t get in.

This has gone on for a few hundred years, and the human race is thinning. If anything covers or breaks a ward line, a hole is created, and the demons can get in to eat you.  Not a very cheery place.

Now, onto the review! Seriously, he was awesome growing up, and continued to be awesome when he started kicking ass later.  Leesha didn’t become likable (for me) until she got back to Cutter’s Hollow, and I’m still not sure how I feel about Rojer.

Most of the other (secondary and tertiary) characters are giant assholes.  Seriously, I found myself angry at just about everyone else in Brett’s world throughout this entire book.  There were a few exceptions (like Bruna, Ragen, Elissa, and Cob), but for the most part, the people of Thesa are shmucks.

I almost think that Brett pushed the cowardice and selfishness a little too far to make Arlen, Leesha, and Rojer’s lives seem more difficult growing up. I can’t believe that many people would be that horrible to each other during such difficult times, but my wife tells me I’m a massive optimist.

All that being said, it’s all of the corruption and badness surrounding Arlen that made me really like him.  He’s a good guy, and that stands out all the more when everyone around him sucks and they all still fail to change him for the worse (minus a lapse here and there).

The Battle of Cutter’s Hollow at the end of the book is vicious and completely necessary to forward the story–I get that.  What I don’t get is why the battle happened.

The Warded Man (a.k.a., Arlen) spends the whole day leading up to the fight warding weapons.  He’s very, very good at warding, and is the only one that knows offensive wards, so it makes sense that he’d be the one to do the work.

However, why not just shore up the defensive wards on the church and maybe one other largish buildings?  That way, no one would have had to fight or die in the night.

I understand that the idea was for Arlen to step into a leadership role–to show people that they can fight the corelings (demons) and actually win.  It’s pivotal to the entire land of Thesa and to Brett’s story.

The problem is, I don’t buy the logic.  I think a little tweaking could have solved this–the church could have been the last building standing outside of Bruna’s hut and Leesha’s home, and there could have been too many survivors to fit in the three buildings, thus forcing the confrontation.

Yes, there was a “flux” going through the town, and it was important to keep the sick separate from the healthy, but that point wasn’t really driven home for me as a reason for people choosing to stay outside and fight.

The setting is very detailed.  There is some ambiguity surrounding the demons, but that’s because no one really knows a ton about the corelings by the time our heroes come into existence.  Science has been largely replaced by superstition and fear, so the ambiguity makes sense and actually adds to the story.

We get a solid idea about how human civilization is shaped in a world where people can’t go outside at night.  People are clustered, living in densely packed cities, or in little hamlets spread throughout the land.  Very few actually travel  because corelings come out at night and eat them.

Because of this, the spread of information and knowledge has slowed to a trickle, and things like proper breeding of other humans have become a pretty important consideration.  Brett makes it clear: humanity is facing extinction–a slow, helpless death.

I’ll buy the next one The Desert Spear is book 2 in the Demon Cycle, and I’ll probably read (or listen) to it soon. I honestly can’t tell you whether or not I loved The Warded Man because I am not 100% sure which way Brett is going to go with the story.

I can tell you that I’m interested enough in how things play out in Thesa that I’m going to continue reading the series. I should be able to decide whether or not I like it by the end of the second book.

In the meantime, happy reading, everyone!