There’s a line in the movie where Star Lord claims to have 12% of a plan. After watching the movie, I realize now why he only bothered with 12%. The other 88% of him was filled with awesome, so there was never any need to worry.

You know what, I’d give The Guardians of the Galaxy at least a 95% awesome rating. It was really quite great, and only had a few minor problems–most of which can be explained away by reading the comics. It was even better than The Avengers, methinks.

Want the gory details? Then keep on reading, my friends. I’ll hide all the spoilers in drop-downs, so it should be pretty safe even if you haven’t seen the movie yet (as long you don’t open the spoiler drop-downs, of course).

Star Lord (his real name is Peter Quill) is a human being, and he spends some time in the vacuum of space with nothing more than a fancy mask for oxygen. This is a little bit of a problem. I mean, sure there’s other . . . uh, let’s call it “questionable” science in the movie, but this bit seems especially blatant. Normally, this space-jaunt is the kind of thing that would really tick me off when watching a movie, but because I’ve read some of the comics, I saw this as more of a minor annoyance. What the movie doesn’t really say (though they do imply it) is that Quill has body upgrades and implants that can keep him alive in vacuum for a couple of minutes. They’re cybernetic, and kinda cool.

It’s not exactly a space helmet . Nice hair though.

Don’t get me wrong, this is still a problem. Thirty of seconds of explanation would have made my complaint go away. In fact, it’s the only complaint my friend and I had as we walked to the car after the movie.

Update: My buddy Warren pointed out an article on Nerdist that talks a little more in-depth about the “surviving in the vacuum of space” problem. Check it out!

My sister thought that there were too many characters and not enough back-story. She wanted to know more about who everybody was. I can’t say I blame her–some back story would have been nice. I’m not sure how they would’ve accomplished it, because, individually, these characters wouldn’t have had enough draw to make successful movie franchises (Avengers style). On top of that, the movie isn’t exactly short at 122 minutes. I’m just not sure they could’ve stuck more back-story in. Still, my sister has a point.

I knew from the first 10 minutes that I’d enjoy the hell out of this movie, and boy was I right. The beginning of Guardians is surprisingly emotional . . .

[su_spoiler title=”A bit of back-story for Star Lord” style=”fancy” icon=”chevron-circle” anchor=”Star Lord history”]Star Lord (just Peter Quill at this point) is a young kid in the hospital as his mother is dying of cancer. This was actually a pretty gut-wrenching scene; especially when she reaches out with the last of her strength to ask Peter to hold her hand as she passes. As a frightened child, Peter turns away, and she dies begging and reaching for him. I’m getting a little misty just thinking about it.

I was surprised at the amount of depth in this scene in this movie–especially when the way it was promoted comes to mind (summer action/sci-fi/hero movie). They did an amazing job of getting me to connect with Peter right from the start.

After his mother dies, Peter runs out of the hospital, completely distraught.  That’s when he gets abducted by the leader of some cosmic thugs. We fast forward a couple of decades to find Star Lord on some blasted planet singing karaoke into conveniently-sized native lizards (which he is using as improvised microphones). It’s hilarious, but it also gives some insight into Quill’s character by showing us how he compensates with loss.[/su_spoiler]

So, to sum up, the movie takes off by introducing us to the central character, Peter Quill (Star Lord). The introduction is surprisingly deep, well thought out, and downright emotional. I was pleasantly impressed.

From there, the movie just keeps on being awesome. The plot holds together, it sets the stage to interleave the Guardians’ story into other Marvel franchises, and, when the movie ends, you realize that you actually love all of the characters. Seriously, if you’ve seen it, give it some real thought. Are there ANY main characters you don’t like in this movie? I mean, the two weakest for me were Drax and Gamora, but I still liked both of them. Hell, one of my favorite lines is from Drax (listen for the one about his reflexes). 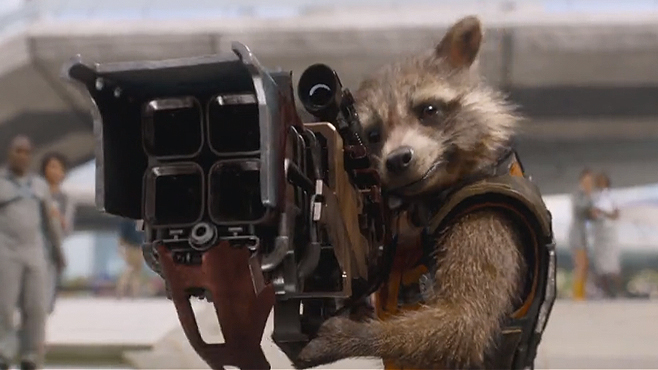 I have to say that my favorite part of this whole movie is how it ends.

[su_spoiler title=”Let’s all hold hands” style=”fancy” icon=”chevron-circle” anchor=”winning”]OK, so Star Lord blasts the big bad guy, Ronan the Accuser, with a super-weapon designed by Rocket Raccoon. It blows up real pretty, but Ronan is pretty much unharmed and really pissed off. In short, it doesn’t work. After Groot saves everyone from a crash by sacrificing himself (Groot is awesome), the guardians find themselves face-to-face with Ronan with no real way of taking him down.

So, after a brilliant distraction by Star Lord (he uses the old “dance-off” trick–yes, really), he is able to make a grab for Ronan’s infinity stone. This is bad, because the stone cannot be contained by a “mere mortal” like Peter “Star Lord” Quill. As Star Lord starts disintegrating, the rest of the team joins him, holding hands, and facing down Ronan. With all of them, they can contain the power of the infinity stone, and they use it vaporize the heck out of Ronan.

Yeah, they won with friendship. How awesome is that?
[/su_spoiler]

This is one of the best “feel-good” movies I think I’ve ever seen. I desperately want to shell out the cash to go see it in theaters again so I can find all the little Easter eggs I probably missed the first time around.

The move is awesome. I like it better than The Avengers, or pretty much any of the other marvel films to date. If you have the smallest curiosity about this movie, or there’s even a glimmer of a thought in your brain that says you might like it, go watch it. It’s worth it.

Amanda, my rather awesome wife, wasn’t interested in seeing the movie at all. She went with us because her sister was going, and ended up really liking it a lot. Huzzah!

I’ll close with some of the best lines in the movie (which I’ll put in a spoiler box just in case you want to wait to enjoy them in the context).

You know what? I could keep going with this all day. Just go watch the movie. If you’ve seen it, go see it again and post your favorite  lines in the comments section for me!
[/su_spoiler]

I hope you enjoyed (or will enjoy) the movie as much as I did!  You’ll at least get some laughs (seriously, if Chris Pratt can’t make you laugh in this movie, something’s wrong, and you should seek medical attention).

It’s not all in-depth character development . . .