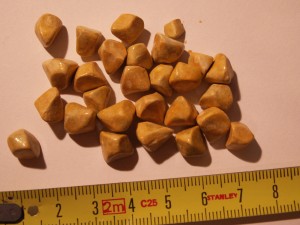 No, those aren’t gold nuggets

Well, as it turns out, gallstones and the subsequent need to remove one’s gallbladder are common on both sides of my family.  Because the condition is hereditary, mine decided it was time to lose its mind (it hurt).

One week ago I had surgery to get my gallbladder the hell out of Dodge.  I’ve been recovering and making up for lost time at work ever since.  So that’s where I’ve been.

Also, because I think the term “gallstones” is kind of lame, I’ve come up with my own name that I’ll be using from now on: “gallblarbles.”

See, gallstones can range from pea to golf ball size.  I figure the middle ground is where marbles live, hence gallblarbles.  You see?  It’s much better.

Anyway, expect a return to your regularly scheduled nerdery!  Later today, I’ll be posting up an old short story I wrote . . .