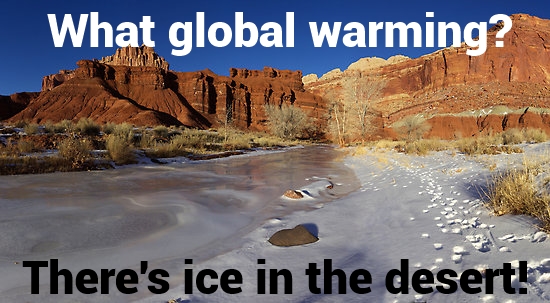 Looks cold to me?

You know how sometimes you think that maybe the world is out to get you, or some all powerful-group is controlling your economic future?

Well, if you’ve ever thought that the blatant disregard for scientific evidence surrounding climate change must be due to some mighty group of rich people trying to bury the truth so they can keep selling the products that make them more rich . . . you’d be right.

This article broke a few days ago describing a multi-billion dollar group of “charities” that campaign against the science behind climate change.

It’s appalling to me that these political organizations would not only rally against science and common sense (sorry folks, even if you don’t believe in climate change, we’re still using way too much in the way of non-renewable resources), but also do so under the tax-free umbrella of a “charitable” organization. These “champions” of freedom are trying to keep us from advancing technologically to attain true energy independence, and they’re doing it without paying proper taxes on the money they spend to advance their political agenda.

That sounds less like patriotism, and more like urinating on our country. I can hear the conversation playing out in my head:

Conspirator 1: Hey Con-2, you hear all about that climate change crap?

Conspirator 2: Yeah, what should we do about it, Con-1?

Conspirator 1: I’m thinking we should start a smear campaign. We’ll tie it to the conservative members of our government, making it a party issue. We pay those guys enough, they should be game.

Conspirator 2: Tie it to a party?

Conspirator 1: Yeah! That way, people that identify themselves as “conservative” will automatically back us up. When we’re done, they won’t even want to buy efficient light bulbs!

Conspirator 2: Um, what about all the science that says we’re actually experiencing an accelerated rate of climate change right now?

Conspirator 1: Oh, that doesn’t matter. We’ll be paying our own people to say all that data is garbage. We’ll get hard-line party members, no problem. We’ll get the rest of the support we need through propaganda.

Conspirator 2: Uh, okay? I don’t want to pay for that.

Conspirator 1: Of course not! We’ll set up “charities” to fund the campaign, hide the money trail, and end spend a whole lot less.  Can you say, “tax credits?”

Conspirator 2: Isn’t all that wrong?

Conspirator 2: You know, denying science (screwing future generations), setting up supposedly charitable organizations aimed solely at propagating our political agenda, investing in this smear campaign instead of some sort of alternative energy we can also use to make money, and generally being assholes?

Conspirator 1: Probably? How should I know? And, who cares?

Conspirator 1 & 2: *maniacal laughter followed by the clubbing of baby seals*