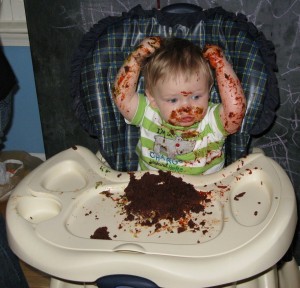 I am the destroyer of cakes!

I’ve come to the realization that, in a lot of ways, kids are more mature than adults.  It sounds backward, and may require redefining the word “mature” when referring to emotional states if I’m right, but hear me out.

Kids tend to be more honest, more forgiving, and more decisive than adults.  They don’t hold grudges–after an argument is resolved, it’s resolved.  If they DO hold a grudge, it’s generally not for a very long time.  We don’t start doing that until around the 11 to 13 age range.

No, I think children, pure and un-jaded, are actually in a much better emotional state of mind than 90% of the adult population.  We had it right when we were little, then we regressed into greedy, mean, and dishonest adults.

I’m not talking about the intended purpose behind bureaucracy–that’s actually a venerable goal.  A functional bureaucracy would create policies and organizational tools that a larger group could utilize to be maximally efficient.

The problem with that is that bureaucracy tends to corrupt.  The people within one come to realize that, as a small group, they have a significant amount of control and influence over a larger group.  In short, the power corrupts.  Instead of finding the best ways to do things, bureaucrats tend to make decisions that gain them more personal power whilst presenting the illusion of efficiency and organization.

Why do you think the word “bureaucracy” has earned such a negative connotation?  It seems like most bureaucrats embody the very definition of “micro-managers,” caring more about tracking numbers than getting work done.

Kids don’t have any of those problems.  If they need to accomplish something as a group, they simply start working.  Try it.  Place a big bin full of Legos in front of a pair of 9 year olds, and ask them to build a truck.  They won’t spend a day or two talking about the best ways to organize the bricks, they simply grab a pair of Lego wheels and get to work.

Is this always the most efficient way of going about things?  Nope.  But it absolutely is creative, and it’s faster than spending hours on end talking about how to do something before you’ve even tried.  We should learn a lesson from kids here, and find a balance.  Find an organized way of doing work that doesn’t actually get in the way of the work itself.

Two: I hate you forever!

Kids will often say something along these lines.  But do they actually hate you forever?  No, not likely.  A child might tell his or her mother that they are the worst parent in the world in the morning, but by the time dinner rolls around, all is forgiven.

No, it’s not mature to go around saying you hate everyone.  However, it’s the forgiveness that I’m trying to point out.  Kids forgive.  You have to do something truly heinous to earn the undying ire of a child.

Now, in an office, it’s a completely different story.  You may find one day that you have some idea to share with the company.  You think it’s great, and that it could change the business for the better almost immediately.  So, you try sharing that idea, hoping it gains traction.

Your idea is eventually accepted; yay!  Only one problem exists now: your solution tramples all over someone else’s solution.  Instead of congratulating you, the trampled turns angry, and forever remembers how you made him or her look bad.

It doesn’t matter that it wasn’t your intention to make anyone look bad–not in the least.  The person you supposedly professionally embarrassed will never forget.

That’s no way to live life.  We need to learn from the children of the world here too.  Let it go.  Be the person with the next big idea, and let that be your revenge.  Or, better yet, forget about it and move on.  Don’t be the guy brooding in the corner.

I’m not saying to be a spineless wimp at work, but I am saying that you’ll get further in life worrying about what you can do to contribute rather than how you are perceived by others.  You’ll get the positive perception you crave through positive contributions naturally, solving both problems quite nicely.

Kids, especially younger ones, tend to be brutally honest.  They will tell you when they’re angry or sad, and they will call you out for doing something stupid.  They will even tell you, directly, how they feel about you.  It can be frustrating at times, but it’s also damned refreshing.

How many times have you looked at another adult in the midst of a conversation and wondered, “I wonder what the hell she’s really thinking?”  I know I do it all the time.  Most of the time, so that others don’t wonder what I am thinking, I tend to say exactly what I’m thinking (which gets me into trouble sometimes).  I guess I never grew up.

Kids don’t tell white lies to make people feel better.  They may lie to get themselves out of trouble sure, but my little nieces and nephews always come clean when pressed.  In fact, to them, lying is a horrible societal crime.  It’s wrong, so they tend not to do it.

It’s a simple philosophy that we should all adopt.  Think about how much easier it’d be to know how you’re doing at work if people simply told you the truth when you asked.  Sure, the news wouldn’t always be good, but it’s possible to be truthful without being mean, and you can’t learn from your mistakes if you don’t know you’re making them.

There’s a reason why the saying “honesty is the best policy” has become so ubiquitous that it is now cliche.  Because it actually is the best policy.  Quit lying to each other–even if they’re white lies.  People can’t learn to be better if they don’t recognize the need, and by lying, you’re just enabling destructive behavior.  Stop it.

To help you stop your bad habits, I give you Bob Newhart’s best psychiatric advice: